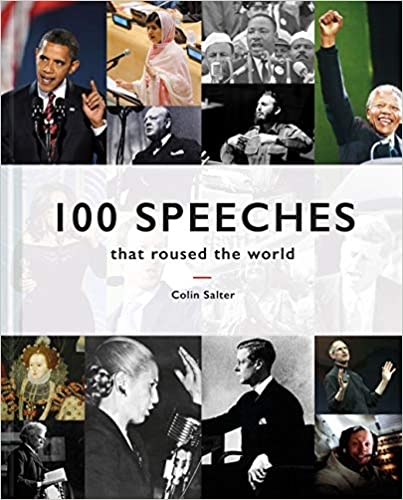 100 Speeches that roused the world

100 Speeches that Roused the World tells the stories behind the most inspiring, rousing and memorable speeches, from ancient Greece to the present day. A concise introduction and analysis of each speech is accompanied by key illustrations and photographs. 100 Speeches presents the power of the spoken word at its finest, from stirring calls to arms to impassioned pleas for peace. Speeches include: Sojourner Truth, "Ain't I a woman" (1851), Abraham Lincoln's Gettysburg Address (1863), Emmeline Pankhurst "Freedom or Death" (1913), Winston Churchill, "Blood, Sweat and Tears" (1940), John F. Kennedy, "We choose to go to the moon" (1961), Martin Luther King, "I Have a Dream" (1963), Nelson Mandela on his release from prison (1990), Barack Obama, "Yes, We Can!" (2008) and Malala Yousafzai, "The right of education for every child" (2013). Others include Cicero, Elizabeth I, George Washington, Mahatma Gandhi, Vladimir Lenin, Adolf Hitler, Joseph Stalin, Enoch Powell, Eva Peron, Mao Zedong, Malcolm X, Margaret Thatcher, Richard M. Nixon, Maya Angelou, Steve Jobs and Oprah Winfrey. This is a classic collection of inspirational, momentous and thought-provoking speeches that have stirred nations, challenged accepted beliefs and changed the course of history.