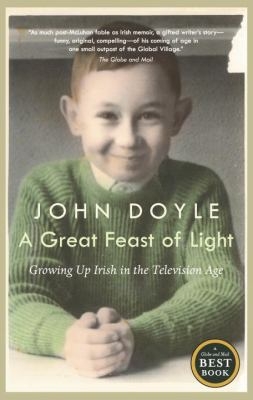 A Great Feast Of Light

“There was no sex in Ireland before television.”
—Irish MP Oliver J. Flanagan, in the early 1960s

The Globe and Mail’s celebrated critic John Doyle was born in the small Irish town of Nenagh in 1957; his father purchased the family’s first television set in 1962. By day, John was schooled by the Christian brothers in the valour of Irish rebel heroes and the saintliness of Catholic martyrs. But in the evenings, television conveyed more subversive messages: American westerns suggested to a bookish young John a model of manhood that had nothing to do with the rigid boundaries of small-town Ireland; and The Late Late Show, Ireland’s homegrown talk-show-cum-variety-program, brought sex into Irish living rooms, eliciting howls of protest from priests and conservative politicians.

As the 1960s and 70s wore on, television introduced the dreams and the actions of the American civil rights movement to Ireland. When the Catholics of Ulster adopted the practices of marching and peaceful protest, television transmitted their clashes with the police, and later with the British army, directly into the Doyles’ home — and broadcast them far beyond as well. It pointed John in the direction of a wider world, inspiring his hopes for the future just as it yanked Ireland out of its past.
Funny, insightful, and always engaging, this illuminating story of a boy and a country transformed by television is indeed a “great feast of light.”


Unknown to me, on that night there were other forces, unseen, in the air. The Irish Television Authority was already at work, silently sending out signals from a transmitter at Kipurre in the Dublin Mountains. Throughout the country, pioneers and eccentrics were attaching aerials to their roofs and chimneys. In shops where televisions were ready for purchase, a set was occasionally, optimistically turned on to see if there was a signal.

Later that mild summer of 1961, an electrical engineer in Limerick, fifteen miles from my backyard, adjusted his aerial, descended from the roof and turned on the set. A test pattern card was crisply visible, but that wasn’t all — a fly was buzzing around the test card, agitatedly moving this way and that. The engineer sat transfixed. He was watching the first live action broadcast on Irish television. It was reported in the Limerick Leader newspaper the next day.

The twentieth century had come late and in a hurry to Ireland. The Church, the rich, and the old ruled. There was no divorce, no contraception and books and movies were routinely banned. New ideas and ways of living had no route into Ireland, until television came. And when it came, its signal fell everywhere, and even the most insular town of Nenagh would be awakened into joy, fear and confusion.
—Excerpt from A Great Feast of Light