Home Non Fiction A Leaf In The Bitter Wind 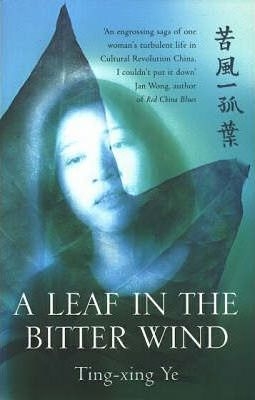 A Leaf In The Bitter Wind

Ting-xing Ye was born in Shanghai in 1952, just three years after the People's Republic of China was officially created. In her enthralling memoir, she weaves together her personal history with the larger history of Mao's China to create a tale both intimate and epic, colored by deep family bonds and the constant foreboding presence of a totalitarian government.

Ye's father, a successful factory owner, had his business taken away at the outset of the Cultural Revolution. His death in 1962, followed by his wife's two years later, left behind a family of five children, a beloved servant known as "Great-Aunt," and the potentially fatal tag of "capitalist." In telling her story, Ye gracefully combines idyllic memories of her childhood on Purple Sunshine Lane with harrowing tales of harassment by the feared Red Guards. As a teen, Ye was sentenced to a prison farm; the book traces her journey from prisoner to university student, her work as a police agent and a translator, and the love affair that led to her dramatic defection to the West.

Already a bestseller in Australia, A Leaf in the Bitter Wind is a true story with all the characteristics of a great novel-danger, romance, smart social commentary, and a liberal dose of wry humor. Anyone seeking out an intimate view of Asian culture will find it in this "rare uncensored glimpse of life in China during one of the worst times in its history."-Calgary Sun

"A gifted narrator with a photographic memory, Ye records, in riveting detail, the capricious existence of the Chinese during the Cultural Revolution."-Bloomsbury Review

"Compelling . . . laced with irony and surprising twists of fate."-Maclean's