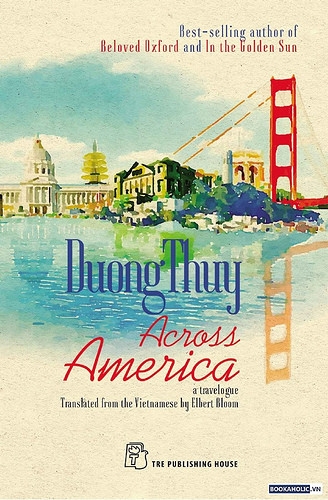 This is a tourist book of the United States which describes a journey that you’ll remember like none other you have ever read. So as you begin to read, just sit back, relax, light a candle, and enjoy your trip. You’ll be taken across the United States to places like Boston, Washington D.C., the Grand Canyon, Yosemite National Park, and many other famous American sites. Your journey, though, will be taken with a Vietnamese author, Duong Thuy, who lives in Ho Chi Minh City, Vietnam. The author wrote the original version of the book in Vietnamese, and it has become a best seller in her native land. The book describes her experiences as she and her husband travel across America on a once in a lifetime tour. Americans may learn a few things about their own country, but the greatest reason to read the book is to learn how the people of a far away land such as Vietnam, with a much different society and culture, perceive the United States. The original title of the book in Vietnamese is Tôi nghĩ tôi thích nước Mỹ (literally I think I like the United States). The English version has been renamed to Across America, though, after consulting with the author, her editor, and her translator.
Vietnam is a young country, for the vast majority of Vietnamese today were born after the Vietnam war, known to them as the American war, so they have no first hand recollection of the war years. The US former president, Barack Obama, actually visited Vietnam last year and was surprised at the warm reception he received from the Vietnamese people. It almost seems as though the Vietnamese people know more about America than Americans realize. So, now just relax and enjoy your trip.