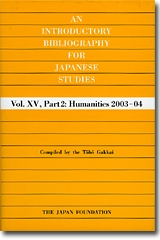 An Introductory Bioliography for Japanese Studies

By: The Japan Foundation

This bibliographical series is intended to facilitate access by non-Japanese researchers to the most recent research trends in Japanese studies by Japanese scholars, with an essay describing the major research trends in various fields and a select bibliographical list with annotations on the more important works. Each volume is made up of two parts,  the social sciences (Party 1) and the humanities (part 2), which are published separately in alternate years. We have been donating the bibliography series mainly to overseas Japanese studies institutions and libraries.