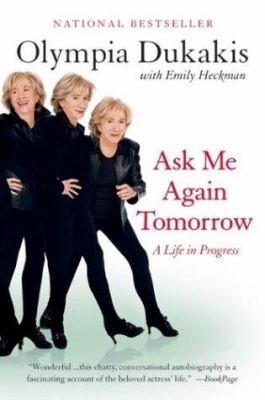 Ask Me Again To Tomorrow

From her fame as the Oscar-winning actress who uttered the famous line in Moonstruck, "I know who I am," to her lauded role as Mrs. Madrigal, the landlord of indeterminate gender in Tales of the City, to being the cousin of presidential candidate Michael Dukakis, Olympia Dukakis has captured the imagination of a broad audience. Known for her straightforward talk, her lack of pretension, and her ongoing quest to explore ever more aspects of herself and her art, she is a role model to women of all ages.

Olympia Dukakis's award-winning role in Moonstruck made her a household name, but before that overnight success came twenty-eight years of hard work. For nineteen of those years, she was an integral part of running the Whole Theatre Company in Montclair, New Jersey, while she and her husband raised their three children. She managed to "have it all" -- career, family, home -- before having it all became fashionable (even if she did root for the wrong team at her sons' soccer games -- "We're in the blue shirts, Mom"). She also managed to care for her aging mother, who developed Alzheimer's and moved into the family home, completing Olympia's three-generation family.

In Ask Me Again Tomorrow, this internationally renowned film and stage star reveals her struggle to assimilate as a first-generation Greek-American, her long alienation from her mother and how that finally resolved itself, her battles with addiction and her volatile personal relationships, and the efforts it took for her to overcome all of this and achieve excellence in her professional calling. A story told with honesty, humor, and the sincere desire to be shared, Ask Me Again Tomorrow is more than a celebrity memoir -- it's a book that will endure.

During a career that has spanned more than forty years, Olympia Dukakis has worked as an actress, director, producer, teacher, and activist. She received an Academy Award for Best Supporting Actress, the New York Film Critics Award, the Los Angeles Film Critics Award, and the Golden Globe Award for her work in the Norman Jewison film Moonstruck. A highly sought-after lecturer on women's issues, on living with osteoporosis (her own) and other health issues, Olympia resides in New York City with her husband, actor Louis Zorich. They have three children, Christina, Peter, and Stefan, and two granddaughters, Isabella and Sofia.