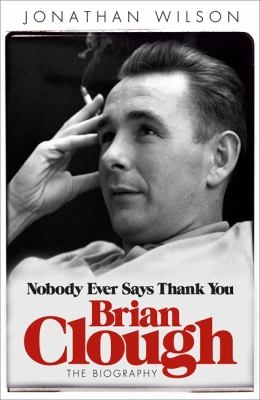 Brian Clough Nobody Ever Says Thank You the Biography

This first full, critical biography of one of England's greatest football managers draws an intimate and powerful portrait Brian Howard Clough was a complex man; the sum of a contradictory bunch of impulses, desires, and drives. This biography draws an intimate, powerful portrait of one of England's greatest football managers, and his right-hand man, Peter Taylor, and reveals how their identities were forged in the unforgiving world of post-war football, a world where, as Clough and Taylor's mentor Harry Storer once said, "Nobody ever says thank you." Clough's playing career was famously and brutally cut short at Roker Park on Boxing Day, 1962. It was then, Peter Taylor said, that the iron first entered into his pal's soul. But as the likes of Inter Milan became a familiar sight in the mud of the Baseball Ground, and the residents of Nottingham were soon accustomed to floodlit nights of European glory, Clough brought the gleam of silverware to the depressed East Midlands of the 1970s. Initial triumph at Derby was followed swiftly by sudden departure and a traumatic 44 days at Leeds. By the end of a frazzled 1974, Clough, always mindful of his austere roots, was financially set for life, but hardened to the realities of football. By the time he was at Forest, Clough's mask was almost permanently donned—a persona based around an exaggerated brashness and seemingly unquenchable thirst for conflict. The mask, though, doubled as a shield behind which lurked a more insecure man, one who craved company yet was frequently alone. Drink fueled the controversies, heightened the razor-sharp wit, and was a salve for the highs of football that never lasted quite long enough and the lows that inevitably followed. Wilson's account is the definitive portrait of this complex and enduring man.