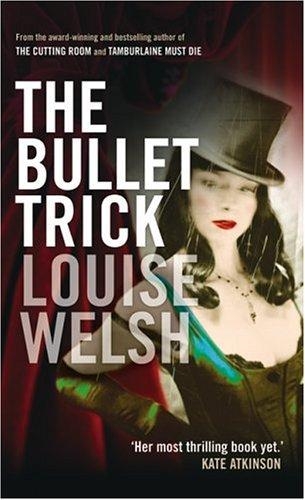 Sometimes an author can make a considerable mark with their first book (as Louise Welsh did with The Cutting Room and almost immediately lose momentum with their next outing. The Bullet Trick is proof that Welsh is no one-trick pony, and this highly entertaining (if, at times, baffling) novel will be gratefully received by those who like their fiction eccentric and unabashed--Welsh doesn't shy away from presenting us with the more extreme forms of human behaviour, sexual or otherwise.

The protagonist here is a Glaswegian conjurer who has seen better days. Those who know their literature of the Gothic (and Louise Welsh is certainly of that number!) will no doubt spot that the author has christened her anti-hero William Wilson--the same name, in fact, as the luckless hero of the Edgar Allen Poe tale of sinister duality. Welsh's Wilson is desperate to escape from his crushing existence in Glasgow, and jumps at the chance to perform his conjuring tricks in the cabarets of Berlin. Leaving behind people who he most definitely wants out his life in this free and easy foreign city seems like the best move of his career. But Welsh implies that (like the Poe character with whom he shares his name), Wilson's real problems lie within himself, with the external danger he encounters a manifestation of the sickness in his own soul.

If the above makes The Bullet Trick sound like a depressing read, nothing could be further from the truth. This is exuberant stuff, floridly plotted and crammed full of the kind of over-the-top characters that we encounter far too little these days in most parochial fiction. It's also worth noting the Welsh's second novel could not be more different from its predecessor, and if she is going to come up with something quite distinct with every new book, that alone is going to mark her out from most of her contemporaries.