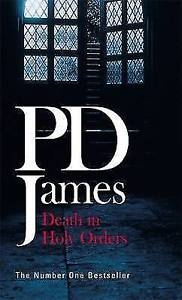 The Barnes & Noble Review
A number of traditions come seamlessly together in P. D. James's Death in Holy Orders, another of her acclaimed mysteries featuring Scotland Yard's Commander Adam Dalgliesh. Included among those traditions are the Golden Age detective story, the police procedural, the literary gothic, and the Victorian novel, with its stately prose, leisurely pacing, and abundant supply of social, familial, and psychological detail. The result of this eclectic combination is a multilayered narrative that works both as a murder mystery and as a complex meditation on faith, love, loyalty, vengeance, and personal responsibility.

The bulk of the novel takes place at St. Anselm's, an embattled, isolated theological college on England's windswept East Anglian coast. When the body of seminarian Ronald Treeves is literally unearthed from a suffocating pile of sand, a coroner's jury turns in a verdict of accidental death. Arms manufacturer Sir Alred Treeves, Ronald's adoptive father, questions the verdict and arranges to have Dalgliesh reinvestigate the boy's death.

Dalgliesh arrives at St. Anselm's at a particularly troubled moment. A longtime employee of the college has just died of an apparent heart attack, and a number of outside visitors have arrived to spend a restful rural weekend. Among the guests are a pair of visiting academics, a policeman on the verge of a breakdown, and Archdeacon Matthew Crampton, an ambitious cleric with a guilty secret and a vested interest in closing down the college. Crampton has had a history of hostile encounters, both with fellow guests and with various members of the seminary staff. On the morning after his arrival, his body is found, savagely beaten, in the sanctified precincts of St. Anselm's Church.

As Dalgliesh soon learns, a great many of the weekend visitors had motives for murdering the archdeacon. Surrounding himself with a picked crew of Scotland Yard regulars, Dalgliesh spearheads a wide-ranging investigation that illuminates the events behind Crampton's death by first exposing the buried secrets of several interconnected lives. In the end,
Dalgliesh -- poet, sleuth, and solitary widower -- successfully identifies a resourceful killer and opens himself up to the possibility of romantic and spiritual renewal.

Death in Holy Orders is an engaging, old-fashioned, morally attractive novel by an 80-year-old master of the craft who continues to write with grace, clarity, and psychological acuity. At an age when most writers have long since passed their creative peaks, James has given us a fresh, quietly enthralling novel that raises large, important questions and solidifies its
author's position as one of the dominant figures of late-20th-century crime fiction. (Bill Sheehan)

Bill Sheehan reviews horror, suspense, and science fiction forCemetery Dance, The New York Review of Science Fiction, and other publications. His book-length critical study of the fiction of Peter Straub, At the Foot of the Story Tree, has been published by Subterranean Press (www.subterraneanpress.com).