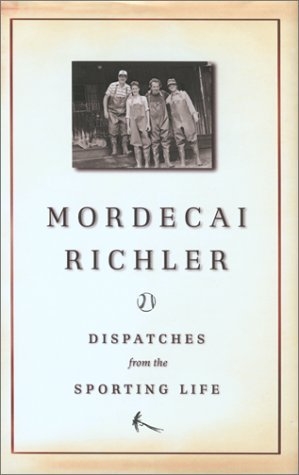 Dispatches from the Sporting Life

Between such novels as The Apprenticeship of Duddy Kravitz, St. Urbain's Horseman, and Barney's Version, Mordecai Richler pursued his obsession with sports -- and he wrote brilliantly about such sports as ice hockey, baseball, salmon fishing, bodybuilding, and wrestling. His essays and articles appeared in such prominent and diverse places as GQ, Esquire, The New York Times Magazine, Inside Sports, Commentary, and The New York Review of Books.Richler spent time with Pete Rose, Wayne Gretzky, and Gordie Howe (when a reporter asked Gordie's then eighty-year-old father if he was still interested in sex, Howe pere replied, "You'll have to ask somebody older than me.") He traveled with Guy LaFleur's Montreal Canadiens, and with the Trail Smoke-Eaters to Stockholm, for the world hockey championships. When a Swedish reporter confronted the Smoke-Eaters' coach and accused him of encouraging violence on the ice, the enraged coach replied, "But I condone it absolutely."

There are shrewdly perceptive pieces here about Sandy Koufax, Hank Greenberg, and lady umpires, and a marvelous essay on Richler's unlimited enthusiasm for the all-inclusive Encyclopedia of Jews in Sports, which includes among its champions one Steve Allan Hertz, an infielder who played a total of five games in Houston in 1964 and had a batting average of .000.

This then is a superb novelist writing unforgettably about his obsession for sports. The work sparkles with Richler's hallmark irony, wit and shrewd perception. It is a book no sports -- or Richler -- fan will want to miss.