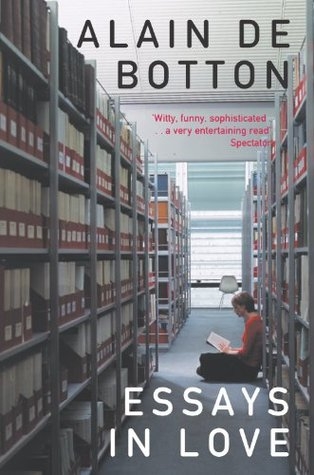 "The longing for a destiny is nowhere stronger than in our romantic life" we are told at the outset of Alain de Botton's On Love, a hip, charming, and devastatingly witty rumination on the thrills and pitfalls of romantic love.

The narrator is smitten by Chloe on a Paris-London flight, and by the time they've reached the luggage carousel, he knows he is in love. He loves her chestnut hair and pale nape and watery green eyes, the way she drives a car and eats Chinese food, the gap that makes her teeth Kantian and not Platonic, her views on Heidegger's Being and Time - although he hates her taste in shoes. On Love plots the course of their affair from the initial delirium of infatuation to the depths of suicidal despair, through the "Marxist" stage of coming to terms with being loved by the unattainable beloved, through a fit of anhedonia, defined in medical texts as a disease resulting from the terror brought on by the threat of utter happiness, and finally through the nausea induced and terrorist tactics employed when the beloved begins, inexplicably, to drift away.

Alain de Botton is simultaneously hilarious and intellectually astute, shifting with ease among such seminal romantic texts as The Divine Comedy, Madame Bovary, and The Bleeding Heart, a self-help book for those who love too much. He is schematically flawless, funny, funky, and totally engaging. Filled with profound observations and useful diagrams, On Love displays and examines for all of us the pain and exhilaration of love, asking, "Can we not be forgiven if we believe ourselves fated to stumble one day upon the man or woman of our dreams? Can we not be excused a certain superstitious faith in a creature who will prove the solution to our relentless yearnings?"