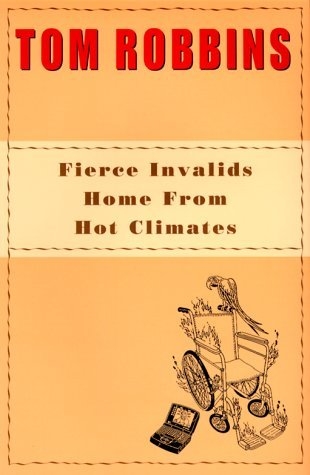 Like many of his characters, Tom Robbins appears to thrive on contradictory stimuli. His last novel, Half Asleep in Frog Pajamas, set its account of spiritual enlightenment and extraterrestrial influences against the credibly rendered backdrop of a faltering stock exchange. His latest, Fierce Invalids Home From Hot Climates, is also concerned with the quest for enlightenment but chooses for its hero a renegade operative for that supremely unenlightened, reflexively conservative institution, the Central Intelligence Agency.

The operative in question is named, simply, Switters, and he gives new meaning to the phrase "loose cannon." Switters, along with a number of his fellow agents, sees himself as an "angel," a subversive element dedicated to opposing the "cowboys" of the CIA, those zealots who have done so much damage in the name of our national interests. A born anarchist, Switters meditates, indulges in mind-altering substances, reads and rereads Finnegans Wake, and obsessively ponders the fate of language in the cybernetic future that is rapidly taking shape around us. He is the antithesis of such traditional CIA employees as his pompousand perfectly namedsuperior, Mayflower Cabot Fitzgerald.

Fierce Invalids begins when Switters, who is bound for Peru on Company business, agrees to perform an act of mercy for his octogenarian grandmother, who wants him to return her petan aging parrot named Sailor Boyto its ancestral home in the Amazon rain forest. Switters's mission is interrupted when a British ethnographerR. Potney Smitheintroduces him to a tribal shaman named, variously, End of Time and Today is Tomorrow, whose head is shaped exactly like a pyramid, and who believes that laughter is one of the animating forces of the universe. Switters spends a single hallucinatory night in End of Time's company, in the course of which he eats his grandmother's parrot and takes a drug-induced trip through "the Hallways of Always," where the secrets of the cosmos reside. In the dazed aftermath of revelation, he learns that arcane knowledge exacts a heavy price. From that day forward, Switters is forbiddenon literal penalty of deathto rest his feet on solid ground.

That is merely the beginning of this wild, unsummarizable tale, a contemporary picaresque in which Switters travelssometimes by wheelchair, sometimes with the aid of stiltsfrom one continent to another, finding love, adventure, and spiritual fulfillment as he attempts to come to terms with the magically altered circumstances of his life. His travels take him from Peru to Seattle, from Seattle to Syria, and from Syria to a climactic encounter in Vatican City. Along the way, he encounters a number of bona fide miracles, meets the model for a famous nude portrait by Henri Matisse, uncovers the lost prophecy of the Lady of Fatima, and attemptswith varying degrees of successto seduce both his 16-year-old stepsister, Suzy, and a 46-year-old cloistered nun named Domino Thiry (pun most definitely intended).

As in most of Robbins's novels, the rambling narrative is designed primarily to accommodate the author's steady stream of observations on the quality of life at the tail end of the 20th century. The result is a baroque, gently didactic novel in which Robbins comments, with wit, acuity, and an increasing sense of personal urgency, on the inadequacy of our political and religious institutions, on the public and private sources of our prevailing spiritual malaise, and on our willing submission to the dictates of a ravenous consumer culture. In the face of all these things, Robbinslike his fictional Peruvian shamancontinues to insist on the primal power of laughter and continues to believe that joy is possible, that dullness of spirit is the one unforgivable sin.

In Fierce Invalids, as in his earlier novels, Robbins's philosophy of joie de vivre is endlessly reflected in the moment-to-moment deployment of his lush, intricate style. There are no dead spaces in a Robbins novel, no drab or perfunctory phrases. Every sentence carries its weight. Every sentence adds something distinctive to the overall ambience of the narrative. Here, for example, is a brief reflection on the quiet pleasures of Seattle's weather:

[Switters] liked its subtle, muted qualities, and the landscape that those qualities encouraged if not engendered: vistas that seemed to have been sketched with a sumi brush dipped in quicksilver and green tea...

And here is a smoke ring, its evanescence captured forever:

He expelled a dancing doughnut of smoke. Like every smoke ring ever blownlike smoke, in generalit bounced in the air like the bastard baby of chemistry and cartooning.

Fierce Invalids is animated throughout by the "mindful playfulness" that is Robbins's dominant aesthetic characteristic. While it is unlikely to win over his numerous detractors (who will doubtless decry its relentlessand deliberate"self-indulgence"), it will surely strike his many admirers as cause for celebration. Tom Robbins is a genuine original, a philosopher clown whose skewed perspective is both startling and illuminating. Like the best of his earlier books, Fierce Invalids Home From Hot Climates is humane, funny, and deeply adventurous fiction, a vibrantly comic refutation of the angst-ridden spirit of the age.