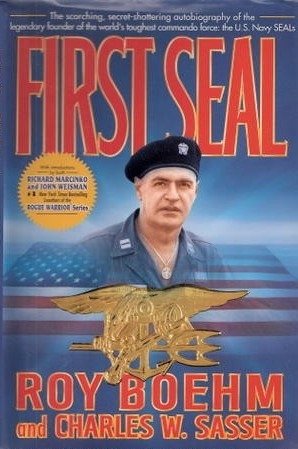 Features introductions by both Richard Marcinko and John Weisman, co-authors of the bestselling "Rogue Warrior" series!

Back in Brooklyn, Boehm's mother once told him, "You'll either
grow up a hero...or you'll end up in prison." But Roy Boehm was fated for heroism from the moment he shipped out with the U.S. Navy, eight months before Pearl Harbor. His brilliant and courageous fighting career would lead him from the monumental sea battles of the South Pacific across the battle zones of Korea to the shores of Castro's Cuba and into the killing fields and jungles of Vietnam.
As the Second World War came to a close and left in its wake an even greater threat to America's freedom -- the Cold War -- Boehm saw that unconventional times required the creation of an unconventional warrior. Drawing on his expertise as a diver and a member of the Navy's Underwater Demolitions Teams, he set out to invent a disciplined, dedicated, and ruthless force capable of attack from sea, air, or land. It would be a unique unit -- willing to disregard fear and walk through fire -- a team that would descend into hell itself to conduct dirty war: infiltration, sabotage, ambush. Boehm's team would become the legendary special operations force known as the Navy SEALs.
Discover the startling truth behind:
Boehm and his SEALs' involvement in the Cuban Missile Crisis, including a personal meeting with President Kennedy.
Life -- and death -- in the rice patties of Vietnam and the streets of Saigon, where, with a VC bounty on his head, Boehm developed relationships with a beautiful enemy spy and deadly Viet Cong officer.
The unconventional techniques and strategies Boehm pioneered in the creation of the SEAL teams and much more.
In combat, Roy Boehm left nothing to chance. In "First SEAL," he leaves nothing to the imagination. With the impact of a depth charge, "First SEAL" delivers an explosive, no-holds-barred, firsthand, inside look at what it takes to be one of the rare breed of men who live for war...or die for their country.