Home Fiction For The Love Of Siam 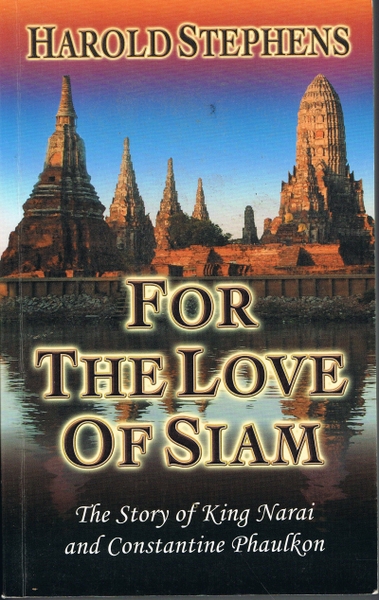 For The Love Of Siam

King Narai of Siam, King Louis XIV of France, Pope Innocent XI of Rome, a Japanese maiden and a shipwrecked Greek sailor, all became entangled once upon a time in history in a story so true and so real it leaves the reader with the puzzling question, why hasn’t it ever been told?

Although each one is from a different nation and from different ranks in life, they all came together into a circle of events composing the most dramatic and romantic story ever recorded in the history of this near mythical capital of old Siam, a bewitching kingdom of the Far East. They all came, simply claiming they did what they did "for the love of Siam."
.
Once Europe tasted the spices of the East, felt the fine silks of India and learned of the might of the gunpowder of China, the continent was never the same. Europe was lured by fine silks and porcelain, elephant tusks of pure ivory, jade and rubies, gunpowder, sandalwood, and for their tables, unknown before, the spices of cloves and pepper, nutmeg and mace and more. A bag of peppercorns was worth more than its weight in gold. The quest was on. But the journey overland along the so called Silk Road across Asia was long and arduous, as Marco Polo had proved in the 13th century.

Perhaps not by land but by sea. And so from Europe set out the explorers, daring seafarers like Magellan and Vasco Da Gama. Their discoveries in the 1500s opened up new sea routes to the Far East and, with these new sea-lanes, trade prospered. The demand in Europe for Eastern goods became even greater than ever before. But it came at a great cost. European nations found themselves at war against one another, fighting to gain control not only of these sea routes but also of the kingdoms of the east from which these treasures came. True, these nations came to trade, but under their own terms, with guns and swords and crosses, to conquer, to spread their religions, grabbing what they could, driven by their insatiable greed. They came, the Portuguese, Spanish, Dutch, French, British, and they battled one another for control, eventfully conquering one Southeast Asian nation after another—except for one, Siam. Here stood a kingdom, defiant, of great wealth, the trading center between East and West, with its capital at Ayutthaya like a glittering jewel, lying far up a river as London is to the Thames and Paris to the Seine. What nation could resist not wanting to possess it? The quest of European powers grew even more intense and they now turned in an attempt to widen the door to Siam. Their pretence was trade and religion but the disguise was to conquer.

Surrounded by these warring European powers who had but one aim in common, the quest for Siam, how could this lone kingdom fend them off? What could one king, alone, really do?

To this day Siam, or Thailand as it is now called, is the only nation in Southeast Asia that has never been colonized by a European nation.
This is that story.