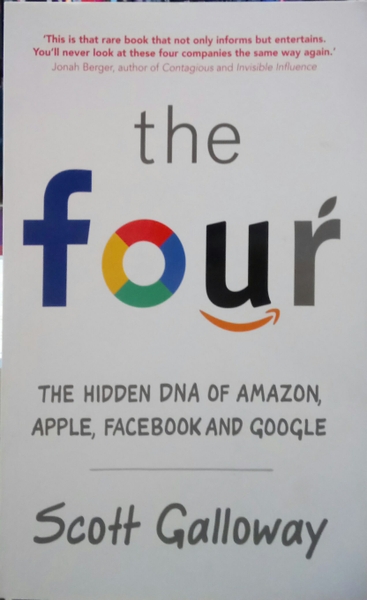 The Four The Hidden DNA of Amazon Apple Facebook and Google

The acclaimed NYU business professor's tour-de-force on the true nature of technology's titans, and what happens next in their struggle to dominate our lives.

Apple, Amazon, Google, and Facebook are in an unprecedented race towards a $1 trillion valuation--and whoever gets there first will exert untold influence over our economy, public policy, and consumer behavior. How did these four become so successful? How high can they continue to rise? Does any other company stand a chance of competing?

To these questions and more, acclaimed NYU / Stern professor Scott Galloway brings bracing answers. In his highly provocative first book, he pulls back the curtain on exactly how Amazon, Apple, Facebook, and Google built their massive empires. While the media spins tales about superior products and designs, and the power of technological innovation, Galloway exposes the truth about these "Four Horsemen":

· None of these four are first movers technologically; they've either copied, stolen, or acquired their ideas.
· Each company uses evolutionary psychology to appeal to our basest instincts: Amazon, our need to hunt and gather; Apple, our need to procreate; Facebook, our need for love; and Google, our need for a God.
· These companies are uniquely successful at leveraging competitive advantage built by digital and then protected by analog moats, from an empire of retail stores (Apple) to the world's most efficient physical distribution network (Amazon.)

Through analysis that's both rigorous and entertaining, Galloway outlines the path for the next trillion-dollar company (the Fifth Horseman) and points to which companies are in the running. (Uber, sure; less obvious, Microsoft and Starbucks.) As with Peter Thiel's Zero to One, readers will come away with fresh, game-changing insights about what it takes to win in today's economy.