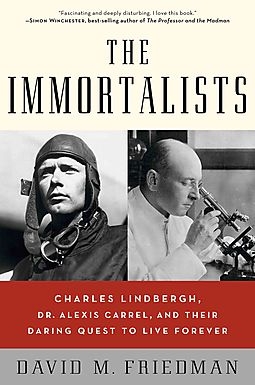 He was one of the most famous men of the twentieth century, the subject of best–selling biographies and a hit movie, as well as the inspiration for a dance step – the Lindy Hop – he himself was too shy to try. But for all the attention lavished on Charles Lindbergh, one story has remained untold until now: his macabre scientific collaboration with Dr. Alexis Carrel. Together this oddest of couples – one a brilliant surgeon turned social engineer, the other a failed dirt farmer turned hero of the skies – embarked on a secret quest to achieve immortality.

Their endeavor began on November 28, 1930, in Carrel's laboratory at the Rockefeller Institute for Medical Research in New York, a haven created by the world's richest man, John D. Rockefeller, so that medical investigators could pursue their wildest dreams, freed from the demands of clinical practice. For Carrel, who won the Nobel Prize in 1912 for pioneering organ transplants, that dream was conquering death. But not for everyone – only a special few.

In one of his more ghoulish experiments, Carrel removed the heart from a chick embryo and placed it in a glass jar, where, with special cleansing and feeding, he kept it alive, with no signs of aging, far beyond the species' natural life span. That result, Carrel believed, suggested that natural death wasn't inevitable.

But to attempt such a test with humans, Carrel needed a mechanical genius to create a device in which severed human organs could live and function indefin–itely. Might that genius be the handsome pilot who astonished the world in May 1927 by flying alone across the Atlantic – a feat even most pilots had thought impos–sible – in a single–engine airplane he designed himself?

Part Frankenstein, part The Professor and the Mad–man, and all true, The Immortalists is the remarkable story of how two men of prodigious achievement, and equally large character flaws, challenged nature's oldest rule, with consequences – personal, professional, and political – neither man anticipated.