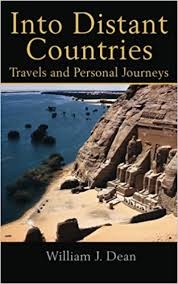 The title of my book, "Into Distant Countries," comes from this passage by James Boswell in his "Life of Johnson" "He [Johnson] talked with uncommon animation of travelling into distant countries; that the mind was enlarged by it."

Part One of my book contains travel essays written by me over a period of years. Travel has been a joy of my life.Johnson was so right when he said of travel, "that the mind was enlarged by it."

Yet Johnson was an infrequent traveler. With Boswell he had toured the Hebrides, and with his dear friends, Hester and Henry Thrale, visited Wales, and in 1775, at age 66, spent two months with them in Paris.

There, writes Walter Jackson Bate in "Samuel Johnson," he watched the King and Queen of France dine at Fontainebleau, saw a rhinoceros in the Royal Menagerie, and observed the law courts, porcelain works at S�vres and the Gobelin tapestry factory.

He would have loved to visit Italy with the Thrales - "A man who has not been in Italy is always conscious of an inferiority"- and even India and "the wall of China," but this was not to be. When their only surviving son died at age nine, his friends lost their zeal to travel abroad.

Part Two of my book contains travel essays of a metaphoric nature - not actual trips, but personal journeys as I call them -taken by me into other worlds: the worlds of literature, opera, social justice and teaching.

While Johnson's travels were limited, when it came to personal journeys, like his writing of the "Dictionary of the English Language," a nine year undertaking of total devotion, he was a colossus, far extending the reaches of the human mind.