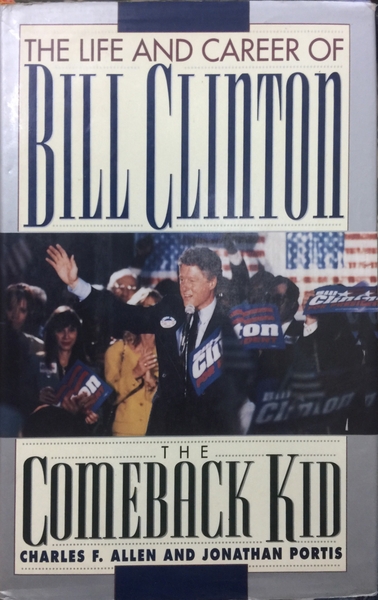 The Life And Career Of Bill Clinton Comeback Kid

Here is the first in-depth, tell-all biography of the young Arkansas governor now battling for the presidency of the United States.The Comeback Kid is based on four years of research and includes extensive interviews with Clinton and his wife, Hillary, his mother, Virginia, teachers and childhood friends, as well as his critics and opponents.An intensely human and dramatic story, The Comeback Kid provides revealing information on Clinton's accomplishments and on the vital issues of his character and judgment: how and why, with the help of his wife, he was able to withstand charges that he had a twelve-year, illicit affair with a nightclub singer; what actually happened during his college days when he smoked marijuana; how Clinton, riding his magic carpet, was able to overcome the charge that he avoided going to Vietnam during the bloodiest days of that war; how, with no experience in foreign policy, "President" Clinton would deal with Japan's economic dominance, the witches' brew of the Middle East, and the constant threat of chaos in what was once the Soviet Union; the real roles played by Bill and Hillary Clinton in reforming the educational system in Arkansas; and the extent to which his wife - with her own liberal agenda - will influence policy decisions.But more than that, Allen and Portis have written an intensely personal story. It begins with William Jefferson Blythe IV's entry into the world on August 19, 1946, four months after his father, Bill Blythe, a traveling salesman, was killed in an automobile accident while driving from Chicago to the family home in Hope, Arkansas.As Bill Clinton later told Charles F. Allen: "I always felt, in some sense, that I should be in a hurry in life because it gave me a real sense of mortality. I mean, most kids never think about when they're going to have to run out of time. I think about it all the time because my father died at twenty-nine, before I was born."In 1963, at the age of seventeen, Clinton was chosen as a delegate to Boys Nation and traveled to Washington, D.C., where he met his idol, John F. Kennedy.Clinton's mother would later say, "When he came back from Washington, holding this picture of himself with Jack Kennedy, and I saw the expression on his face, I knew right then that politics was the answer for him."The authors go on to tell the behind-the-scenes stories of his fierce, losing race for the U.S. Congress, his election as attorney general at age twenty-nine, and Arkansas's youngest governor at thirty-two, his defeat in 1980 and his triumph in the next election, the embarrassing nominating speech for Democratic candidate Michael Dukakis in 1988, when he was shouted off the podium, his comeback campaign for the Democratic Party's nomination, and much more.Finally, The Comeback Kid deals with two ultimate questions: What does Bill Clinton have to do to beat incumbent George Bush and the maverick Ross Perot? And what kind of President would Bill Clinton make?Poignant, candid, and at all times honest, The Comeback Kid will give you a true picture of the man who would do almost anything to win the presidency of the United States.