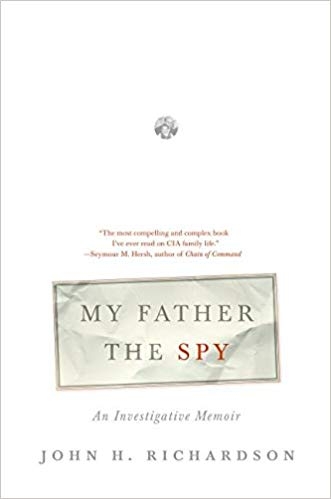 My Father The Spy

As his father nears death in his retirement home in Mexico, author John H. Richardson begins to unravel a life filled with drama and secrecy. In the first years of World War II, his father, then an idealistic student of literature and sociology, was recruited into military intelligence and thrown into action in Europe, getting his education on the fly as he roamed the battlefields of Italy and Austria, hunting spies and saboteurs. One of the founding members of the CIA, he quickly emerged as a seasoned "chief of station" in some of the hottest assignments of the cold war, from the back alleys of occupied Vienna to the ballrooms of Athens to the jungles of the Philippines -- and especially Saigon, where he became a pivotal player in the event most historians see as the turning point of the Vietnam War, the overthrow of South Vietnamese president Ngo Dinh Diem.

He had also become a family man, with a wife and two children. As John Jr. and his sister came of age in exotic postings across the world, they struggled to accommodate themselves to their father, by now a rigid and distant cold warrior, and their conflict opens a window on the tumult of the sixties and Vietnam. Only years after the CIA called John Sr. back to the States to teach other spies did father and son repair their relationship, developing a profound emotional and intellectual connection.

Through the daily happenings at home, and his father's actions, reconstructed from declassified documents and extensive interviews with former spies and government officials, Richardson reveals both the innermost workings of a family that played an important role in the clandestine wrangling of the cold war and the deeper war thatturns the world of the fathers into the world of the sons.