Home Fiction My Life as a Fake 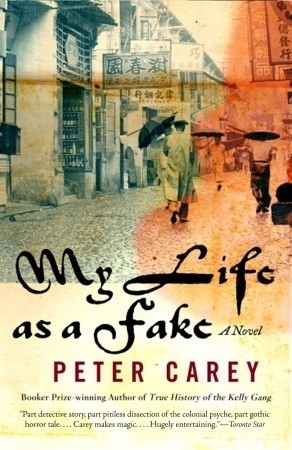 My Life as a Fake

Following the triumph of his Booker Prize–winning True History of the Kelly Gang, Peter Carey ventures into the Far East with a novel shot through with mysteries at once historical, literary, and personal.

Sarah Wode-Douglass, the editor of a London poetry magazine, had grown up knowing the famous and infamous John Slater. And because he figured prominently in the disaster that was her parents’ marriage, when Slater proposes that she accompany him to Malaysia, Sarah embarks out of curiosity on a journey that becomes, instead, a lifelong obsession. Her discoveries spiral outward from Christopher Chubb, a destitute Australian she meets by chance in the steamy, fetid city of Kuala Lumpur. He is mad, Slater warns her, explaining the ruinous hoax Chubb had committed decades earlier. But lurking behind the man’s peculiarity and arrogance, Sarah senses, is artistic genius, in the form of a manuscript he teases her with and which she soon would do anything to acquire. The provenance of this work, she gradually learns, is marked by kidnapping, exile, and death — a relentless saga that reaches from Melbourne to Bali, Sumatra, and Java, and that more than once compels her back to Malaysia without ever disclosing all of its secrets, only the power of the imagination and the price it can exact from those who would wield it.

Astonishing, mesmerizing, and ultimately shocking, My Life as a Fake is the most audacious novel yet in Peter Carey’s extraordinary career.