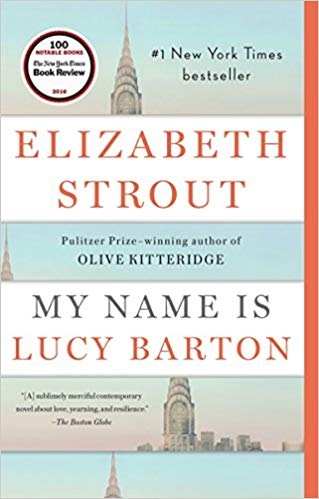 My Name is Lucy Barton

#1 NEW YORK TIMES BESTSELLER - A simple hospital visit becomes a portal to the tender relationship between mother and daughter in this extraordinary novel by the Pulitzer Prize-winning author of Olive Kitteridge and The Burgess Boys. NAMED ONE OF THE BEST BOOKS OF THE YEAR BY
The Washington Post - The New York Times Book Review - NPR - BookPage - LibraryReads - Minneapolis Star Tribune - St. Louis Post-Dispatch Lucy Barton is recovering slowly from what should have been a simple operation. Her mother, to whom she hasn't spoken for many years, comes to see her. Gentle gossip about people from Lucy's childhood in Amgash, Illinois, seems to reconnect them, but just below the surface lie the tension and longing that have informed every aspect of Lucy's life: her escape from her troubled family, her desire to become a writer, her marriage, her love for her two daughters. Knitting this powerful narrative together is the brilliant storytelling voice of Lucy herself: keenly observant, deeply human, and truly unforgettable. LONGLISTED FOR THE MAN BOOKER PRIZE

"A quiet, sublimely merciful contemporary novel about love, yearning, and resilience in a family damaged beyond words."--The Boston Globe "It is Lucy's gentle honesty, complex relationship with her husband, and nuanced response to her mother's shortcomings that make this novel so subtly powerful."--San Francisco Chronicle "A short novel about love, particularly the complicated love between mothers and daughters, but also simpler, more sudden bonds . . . It evokes these connections in a style so spare, so pure and so profound the book almost seems to be a kind of scripture or sutra, if a very down-to-earth and unpretentious one."--Newsday "Spectacular . . . Smart and cagey in every way. It is both a book of withholdings and a book of great openness and wisdom. . . . [Strout] is in supreme and magnificent command of this novel at all times."--Lily King, The Washington Post "An aching, illuminating look at mother-daughter devotion."--People "This slim, perceptive novel packs more sentiment and pain into its unsparingly honest and forthright prose than novels two and three times as long. Strout . . . has always awed us with her ability to put into words the mysterious and unfathomable ways in which people cherish each other."--Chicago Tribune