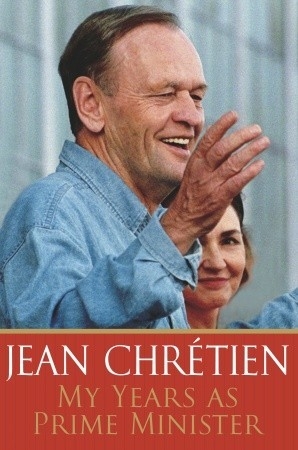 My Years as Prime Minister

My Years as Prime Minister is Jean Chrétien’s own story, told with insight and humour, of his ten years at 24 Sussex Drive as Canada’s twentieth prime minister.

By the time he left office, Jean Chrétien had been in politics for forty years – and his experience is evident on every page of his important, engaging memoir. Chrétien loves to tell a good tale – and he does so here in the same honest, plain-spoken style of Straight from the Heart, his earlier bestselling account of his years as a Cabinet minister. He gives us a self-portrait of a working prime minister – the passionate Canadian renowned for finishing every speech with Vive le Canada!

Chrétien knows how government works, and his political instincts are sharp. Through the decade 1993 to 2003 we watch as he wins three majority elections as leader of the Liberal Party of Canada. Finding the country in a dreadful state, dangerously in debt and bitterly divided, he describes how his government wiped out the deficit in just four years, helped to defeat the separatists in the cliffhanger Quebec referendum, passed the Clarity Act, and set out to fulfill the economic and social promises his party made in its famous Red Books. He reveals how and why he kept the country out of the war in Iraq – a defining moment for many Canadians; led Team Canada on whirlwind trade missions around the world; and participated in a host of major international summits.

Along with his astute comments on politics and government, he gives candid portraits of a broad cast of characters. Over a beer, Tony Blair confides his hesitation about taking Britain into the Iraq War; in the corridors of the United Nations, Bill Clinton offers to speak to Quebecers on behalf of Canadian unity; while at home, Chrétien reveals the events leading up to the departure of his finance minister, Paul Martin. He recounts the dramatic night in which his quick-thinking wife, Aline, saved him from an assassination attempt at 24 Sussex Drive; and, with lively humour, he describes how he and Clinton successfully escaped from their own bodyguards – to the consternation of all.

Even in the highest office in the land, Jean Chrétien never lost his connection with ordinary Canadians. He is as warm and funny in his recollections as in person, at once combative and cool-headed, a man full of vitality and charm. Above all, from start to finish, his love for his country and his passion to keep it united run clear and deep.