Home Non Fiction The Name Above The Title 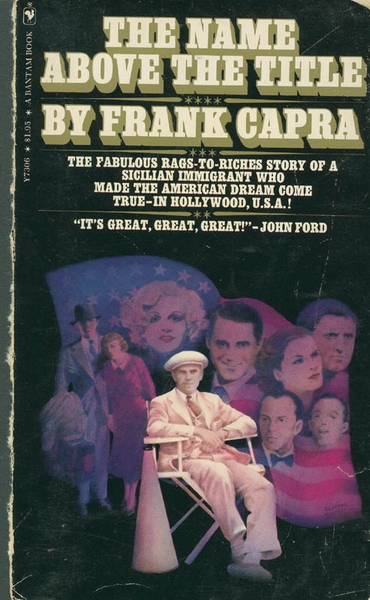 The Name Above The Title

Although Frank Capra (1897–1991) is best known as the director of It Happened One Night, Mr. Deeds Goes to Town, You Can't Take It with You, Mr. Smith Goes to Washington, Arsenic and Old Lace, and It's a Wonderful Life, he was also an award-winning documentary filmmaker as well as a behind-the-scene force in the Director's Guild, the Motion Picture Academy, and the Producer's Guild. He worked with or knew socially everyone in the movie business from Mack Sennett, Chaplin, and Keaton in the silent era through the illustrious names of the golden age. He directed Clark Gable, Jimmy Stewart, Cary Grant, Gary Cooper, Bing Crosby, Frank Sinatra, Jean Harlow, Claudette Colbert, Bette Davis, and others. Reading his autobiography is like having Capra sitting in your living room, regaling you with his anecdotes. In The Name Above the Title he reveals the deeply personal story of how, despite winning six Academy Awards, he struggled throughout his life against the glamors, vagaries, and frustrations of Hollywood for the creative freedom to make some of the most memorable films of all time.