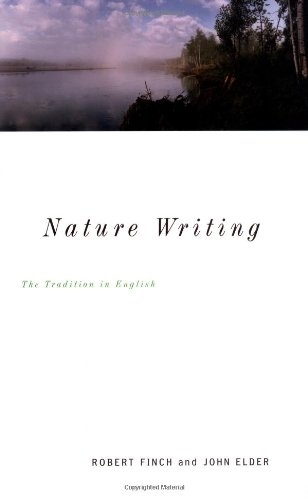 Nature Writing the Tradition in English

The definitive collection of prose masterpieces on nature, fully revised and expanded.

Encounters with nature have produced some of the great literature of our age. Darwin's ruminations on the Galapagos Islands, Thoreau's communion with Walden Pond, and Rachel Carson's evocation of the rocky coast of Maine are monuments in the history of writing and thought. No less significant are the searching essays of such contemporary writers as Wendell Berry, Terry Tempest Williams, Annie Dillard, and Bill McKibben. Nature Writing: The Tradition in English, includes 152 selections by 132 authors. This is the definitive collection of a many-voiced genre that has flourished in England and America for over two hundred years.

Here one will find such classic selections as William Bartram's parley with crocodiles in south Florida, John Hay's exchange with a dying Arctic dovekie, and John Muir's riding out a mountain windstorm in the branches of a lofty Douglas spruce.

New essays by Vladimir Nabokov, Scott Sanders, David Quammen, and Gary Snyder have been included, along with selections by such writers as David Abram, Diane Ackerman, Rick Bass, Jane Brox, John Daniel, Trudy Dittmar, Linda Hasselstrom, Ray Gonzalez, and Sharman Apt Russell. The editors of this volume have taken a special interest in including writers of color, as well as authors from many parts of the English-speaking world. Recently rediscovered works of a number of earlier writers, especially those of nineteenth-century women, also expand the range of this collection.

Nature Writing: The Tradition in English displays nature in all the incarnations―enticing, chaotic, generous, cruel, mysterious, and heartbreaking―that have inspired men and women to portray it in words. The variety and strength of these selections represent one of the most significant and original literary achievements of our culture.

Never before have our encounters with the natural world been imbued with so much peril and so much possibility. By listening to the voices of those who have observed and reflected upon that world so powerfully, we are all enriched.