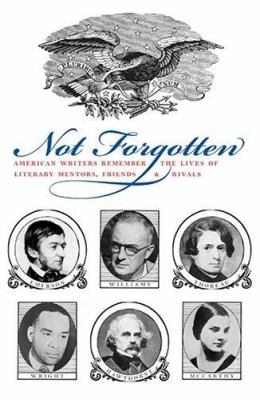 We know the names on both sides of these coins: both the authors whose lives are celebrated, and the names of their friends performing the celebration. And what a list it is: Emerson on Thoreau, Henry James on Lowell, Howells on Twain, O'Hara on Fitzgerald, Tate on Eliot, Davenport on Merton, Merrill on Bishop. If there is a published pantheon in which the best of a writer's life and work is recorded for posterity by their closest friends, this book contains the holy scriptures. For here is a selection of well considered (and often shockingly honest) appraisals of the greatest names in American literature memorialized, eulogized, and sometimes criticized by their dearest friends and their closest peers. All are personal; many are poignant and in every case the reader reaches the final sentences knowing far more about the subject than before, not as they would from a scholarly entry in a biographical dictionary, but at first hand, close up, encomia written in flesh and blood.

These memoria consistently manifest an urgency on the writers' part to convey the personal, the intimate, the unknown. Katherine Anne Porter writes of Flannery O'Connor, "I want to tell what she looked like and how she carried herself and how she sounded standing balanced lightly on her aluminum crutches," John O'Hara starts his appraisal of Fitzgerald with the observation, "It is granted that Scott Fitzgerald was not a lovable man, but most of the time he was a friendly one, and that characteristic, in a man of his professional standing, is as much as anyone can ask."

Personal, forthright, and honest, these appreciations sound the notes of our literary past that still resonate in our minds