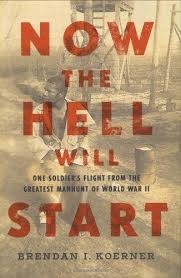 Now The Hell Will Start

Part history, part thriller, Now the Hell Will Start tells the astonishing tale of Herman Perry, the soldier who sparked the greatest manhunt of World War II, and who became that war's unlikeliest folk hero

A true story of murder, love, and headhunters, Now the Hell Will Start tells the remarkable tale of Herman Perry, a budding playboy from the streets of Washington, D.C., who wound up going native in the Indo-Burmese jungle--not because he yearned for adventure, but rather to escape the greatest manhunt conducted by the United States Army during World War II.

An African American G.I. assigned to a segregated labor battalion, Perry was shipped to South Asia in 1943, enduring unspeakable hardships while sailing around the globe. He was one of thousands of black soldiers dispatched to build the Ledo Road, a highway meant to appease China's conniving dictator, Chiang Kai-shek. Stretching from the thickly forested mountains of northeast India across the tiger-infested vales of Burma, the road was a lethal nightmare, beset by monsoons, malaria, and insects that chewed men's flesh to pulp.

Perry could not endure the jungle's brutality, nor the racist treatment meted out by his white officers. He found solace in opium and marijuana, which further warped his fraying psyche. Finally, on March 5, 1944, he broke down--an emotional collapse that ended with him shooting an unarmed white lieutenant.

So began Perry's flight through the Indo-Burmese wilderness, one of the planet's most hostile realms. While the military police combed the brothels of Calcutta, Perry trekked through the jungle, eventually stumbling upon a village festooned with polished human skulls. It was here, amid a tribe of elaborately tattooed headhunters, that Herman Perry would find bliss--and would marry the chief's fourteen-year-old daughter.

Starting off with nothing more than a ten-word snippet culled from an obscure bibliography, Brendan I. Koerner spent nearly five years chasing Perry's ghost--a pursuit that eventually led him to the remotest corners of India and Burma, where drug runners and ethnic militias now hold sway. Along the way, Koerner uncovered the forgotten story of the Ledo Road's black G.I.s, for whom Jim Crow was as virulent an enemy as the Japanese. Many of these troops revered the elusive Perry as a folk hero--whom they named the Jungle King.

Sweeping from North Carolina's Depression-era cotton fields all the way to the Himalayas, Now the Hell Will Start is an epic saga of hubris, cruelty, and redemption. Yet it is also an exhilarating thriller, a cat-and-mouse yarn that dazzles and haunts.