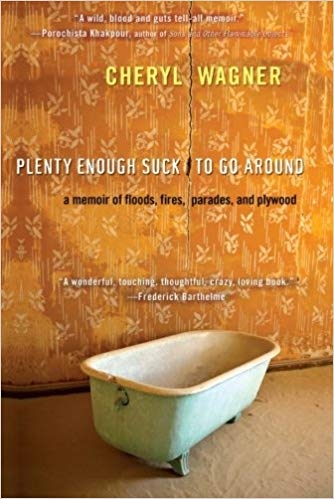 Plenty Enough Suck To Go Around

Print and public-radio journalist Wagner describes rebuilding after Hurricane Katrina...Despite Kafkaesque experiences with the infamous bureaucratic mess that threatened to undo New Orleans once and for all, the couple held on to their optimism for the city and their little piece of it. Wagner captures the nostalgia, the heartbreak and the friendships spawned in Katrina's turbulent aftermath with raw emotional honesty free of sentimentality. Unflinching, humorous and heartfelt.Kirkus Reviews

The cliche "New Orleans gets into people's blood" happens to be very truejust not always convenient. For Cheryl Wagner, along with her indie-band boyfriend, a few eccentric pals, and two aging basset hounds, abandoning the city she loved wasn't an option.

This is the story of Cheryl's disturbing surprise view from her front porch after she moved back home to find everything she treasured in shambles...and her determined, absurd, and darkly funny three-year journey of trying to piece it all back together.

In the same heartfelt and hilarious voice that has drawn thousands of listeners to her broadcasts on Public Radio International's This American Life, Wagner shares her unique yet universal story of rebuilding a life after it's been flooded, dried, and died...