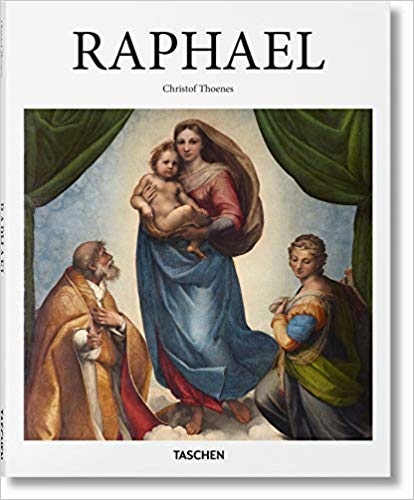 In art history, we tend to be on first name terms only with the most revered of masters. The Renaissance painter and architect Raphael Santi (1483–1520) is one such star. The man we call simply Raphael has for centuries been hailed as a supreme Renaissance artist. For some, he even outstrips his equally famous, equally first-named, contemporaries, Leonardo and Michelangelo.

From 1500 to 1508, Raphael worked throughout central Italy, particularly in Florence where he secured his reputation as a painter of portraits and beautifully rendered Madonnas, archetypical icons within the Catholic faith. In 1508 he was summoned to Rome by Pope Julius II and later embarked on an ambitious mural scheme for the Stanza della Segnatura in the Vatican. Within this room, Raphael’s The School of Athens is considered a paradigm of the High Renaissance, merging Classical philosophy with perfected perspectival space, animated figures, and a composition of majestic balance.

This essential introduction explores how in just two decades of work, Raphael painted his way to legendary greatness. With highlights from his prolific output, it presents the mastery of figures and forms that secured his place not only in the trinity of Renaissance luminaries but also among the most esteemed artists of all time.