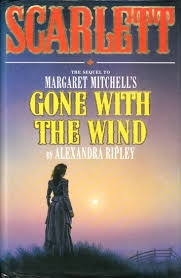 Gone With the Wind... dramatic, romantic, sweeping in its depiction of a time and place in American history, unparalleled in its portrayal of men and women at once larger than life and as real as ourselves... the book that, for over half a century, has been the most praised, the most popular, and the most beloved historical novel ever written in or about America.

Now, the story begun in Margaret Mitchell's great classic, the story that closed with a young woman telling herself, "Tomorrow is another day," continues--and the love affair between Scarlett O'Hara and Rhett Butler, the greatest love affair in all fiction, reaches its startling culmination.

Four years in the writing, Scarlett: The Sequel to Margaret Mitchell's Gone With the Wind is the product of painstaking research, admiration and respect for the original work, and the fertile imagination of accomplished and bestselling historical writer ALEXANDRA RIPLEY. Scarlett seamlessly picks up the narrative, bringing us back to Tara and the people we remember so well: Rhett, Ashley, Mammy, Suellen, Aunt Pittypat, and, of course, Scarlett herself. We meet fascinating, new men and women who enrich and enlarge the story. And we get to know many characters who stayed in the background of Margaret Mitchell's broad opus, as they step forward in this long-awaited sequel.

What happens to Ashley now that Melanie is gone? Does Scarlett find a way to get Rhett back? Where do the upcoming years take them? And what new joys, frustrations, and adventures does the future hold? Using the elements and events set in motion in Margaret Mitchell's novel, rich with surprises and exciting developments, Scarlett is an irresistible and colorful read that stands on its own, even as it satisfies our longing to reenter the world of Gone With the Wind.