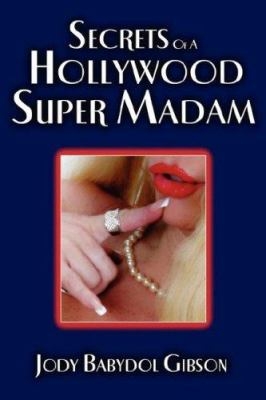 Secrets Of A Hollywood Super Madam

Secrets of a Hollywood Super Madam is a fascinating look at the true life account of Jody Babydol Gibson who for thirteen years operated an Escort Empire that serviced the sexual secrets of the rich and famous which answer the three questions she gets asked the most: How did you get started as a Madam? Where did you find the girls? What was it like in prison? She walked the walk, and now she talks the talk including "naming names" of her A-List celebrity clientele which include Ben Affleck, Bruce Willis, Tommy La Sorda, and government officials which are all supported by actual court documents taken from the infamous "Black Book" used to convict her and kept under seal during her high profile trial. What's most interesting is that this unlikely madam was born into wealth and privilege from an entertainment family whose mother discovered Tom Cruise! And she was an aspiring recording artist being groomed for 'pop-stardom' during her early beginnings and pre-infamy as the Hollywood Super Madam she was known only as Babydol to the public. All she really wanted to do was make videos for MTV! For the thirteen years Ms.Gibson had her escort empire with over 1000 clients and 300 of the most beautiful women in the world, she led a 007 secret 'double-life' as Babydol the recording artist by day, and Sasha the Super Madam by night, and keeping these two lives completely separate was paramount to her so as not to undermine her creative talents. You can still access her CD's on E-Bay keyword Babydol, or listen at www.babydol.com. Most compelling is the very heavy price she paid when after a seven year sting by the Organized Crime Task Force her empire crumbled leading to her capture and conviction. The political agenda surrounding her trial with celebrities and government officials found her sentenced and placed in the most severe state prison in the state of California which she covers in a most gut wrenching way detailed in this book. As she tells it: "They couldn't have chosen a more poorly suited candidate for this journey; my English was too formal, I was heterosexual, didn't do drugs, and had no idea of how to handle the perilous hell I was subjected to. There's no manual you can find printed that prepares one for this hellacious journey into complete darkness." Further, Ms. Gibson approaches this controversial subject matter in a way that's gritty, nasty, salacious, sexy, frightening, horrifying, dangerous, deadly, and above all, deliciously decadent. Honestly portrayed as she speaks from the heart Secrets of a Hollywood Super Madam is a true testament of her ability to survive. Contains exotic content.