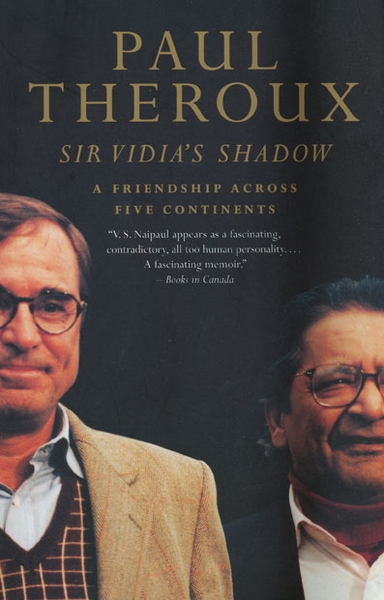 In several of his recent fictions, Paul Theroux has visibly mined his own experience for raw material, going so far as to provide the protagonist of My Other Life with his own name and curriculum vitae. Now, in Sir Vidia's Shadow, he casts a cold and cantankerous eye on his friendship with V.S. Naipaul. The two first met in Uganda in 1966, when the 23-year-old Theroux was teaching at the local university and trying, with only limited success, to transform himself into a writer. The arrival of Naipaul--at 34 already a world-class novelist, with A House for Mr. Biswas under his belt--was a signal event in Theroux's life: "I had been working in the dark, just groping, until I had met Vidia."

After being squired around Uganda, Kenya, and Rwanda by the author, Naipaul returned to London. Their correspondence continued, and the relationship--in which Theroux was very much the junior partner and acolyte--deepened. During a holiday visit to London the next year, he realized that their rapport "was as strong as love. He was my friend, he had shown me what was good in my writing, he had drawn a line through anything that was false." And indeed, over the next three decades the two exchanged a steady stream of letters, visits, phone calls, and authorial confidences. Yet this most productive of literary friendships came to an abrupt end in 1996, when Naipaul--now knighted and recently remarried--burned a number of bridges and tossed his relationship with Theroux into the conflagration.

All of which brings us to Sir Vidia's Shadow, a peculiar mixture of autobiography, Boswellian chronicle, and poison-pen letter. In many ways, it's a fascinating and devilishly skilled performance. For starters, Theroux spent more time in his subject's company than Boswell ever spent in Johnson's, which gives his portrait a widescreen verisimilitude. He documents Naipaul's loony fastidiousness, his passion for language, "the laughter in his lungs like a loud kind of hydraulics," and the very sound of his typewriter (which, just for the record, goes chick-chick-chick). Theroux also gives a superb sense of how such literary apprenticeships can function to the mutual benefit of master and disciple--and how they can erode. By 1975, after all, Theroux had become the bestselling author of The Great Railway Bazaar, while Naipaul remained an under-remunerated critics' darling. Out of habit, Theroux stayed in the older man's shadow. Still, as the book progresses, it becomes harder and harder to tell precisely who's got the anxiety and who's got the influence.

It also becomes harder and harder to ignore Theroux's late-breaking animus toward his subject. His goal--stated not only in the book but in various tailgunning replies to his critics--was to write an accurate account of a long, rich friendship. "This narrative is not something that would be improved by the masks of fiction," he declares. "It needs only to be put in order. I am free of the constraint of alteration and fictionalizing." Yet every book has a tendency to break free of the author's intentions, and Sir Vidia's Shadow is no exception. For each reverent (and convincing) passage about his subject, there's another in which Theroux seems to be administering some deeply ambivalent payback. He contrasts Naipaul's sexless misogyny with his own erotic enthusiasm, and his own generosity with his hero's miserly behavior (although Naipaul's penny-pinching and check-dodging can make him strangely endearing--the Jack Benny of contemporary letters). At times Theroux seems determined to explore all seven types of ambiguity, which makes for both deliberate and not-so-deliberate hilarity. He also sounds uncannily like a spurned lover. And perhaps that residue of expired passion accounts for both the brilliance of Sir Vidia's Shadow and its disturbing, sometimes queasy pathos.