Home Fiction Skinny Leg and All 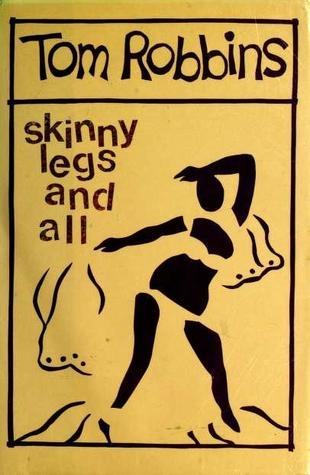 Skinny Leg and All

An Arab and a Jew open a restaurant together across the street from the United Nations....

It sounds like the beginning of an ethnic joke, but it's the axis around which spins the long-awaited new Tom Robbins novel, a gutsy, fun-loving, and alarmingly provocative book in which a bean can philosophizes, a dessert spoon mystifies, a young waitress takes on the New York art world, and a rowdy redneck welder discovers the lost god of Palestine--while the illusions that obscure humanity's view of the true universe fall away, one by one, like Salome's veils.

Or like the walls of the repeatedly bombed restaurant--for Isaac & Ishmael's, an experiment in international brotherhood, is assaulted by Arabs, Jews, and Christians alike (and not because of its lousy menu). Its greatest crisis, however, comes when it engenders a showdown between the Dance of the Seven Veils and the Super Bowl.

Skinny Legs and All, Robbins's most political novel, is also his most controversial, dealing as it does--in Robins's audacious manner--with the most sensitive issues of the day: race, politics marriage, art, religion, money and lust.

This time, the bestselling author of Jitterbug Perfume, Even Cowgirls Get the Blues, et al., is writing about the upcoming millennium as seen through the violently scratched lens of the Middle East. But though Jerusalem, ancient an new, is the book's spiritual and psychological setting, every scene but the last takes place in a contemporary America. Leave it to a daredevil like Tom Robbins to pull that one off.

Skinny Legs and All lyrically weaves through what some call the "End Days" of our planet. Refusing to avert its gaze from the horrors of the apocalypse, it also refuses to let the alleged end of the world spoil its mood. And its mood is defiantly upbeat.