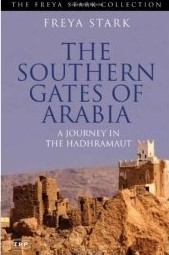 The Southern Gates Of Arabia

In 1934, a 42-year-old Englishwoman named Freya Stark arrived in the British-governed Protectorate of Aden on a singular mission: to locate the fabled, long-lost city of Shabwa.

Located on the high Hadramaut plateau in what is now Yemen, Shabwa was renowned in antiquity as the source of frankincense. Little visited even then, it was also thought to be a particularly forbidding place; Genesis mentions it as the "enclosure of death," and the Roman geographer Pliny reported that it contained 60 great temples and wealth beyond measure. That was good enough for Stark, who, having not long before made a difficult passage across the badlands of Iran, thrived on improbable adventures. And so, by burro and whatever mechanical conveyances she could find, she ascended the high mountains into a world that was sometimes perilous, but that also sometimes approached fairy-tale dimensions, as when, climbing the Hadramaut, she writes, "The path kept high and open, until gradually the valley clefts narrowed again upon us, and shut us in walls whose luxuriant green made a romantic landscape of the kind usually only invented in pictures."

Stark never reached Shabwa; laid low by measles, she had to be evacuated from territory overrun in any event by warring religious factions and gangs of bandits. Though cut short, her time in the Yemeni highlands yielded this superb travel narrative, full of uncommon vistas and milieus (harems, bazaars, and Bedouin camps among them). Anyone who values tales of adventure well told will find Stark's body of work--and this book in particular--to be full of treasures. --Gregory McNamee