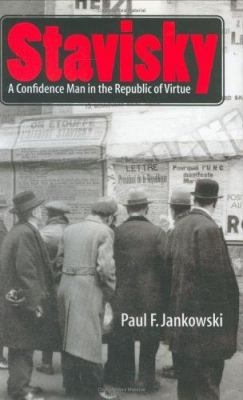 Stavisky A Confidence Man In The Republic Of Virtue

"A swindler charmed and spent his way to the heights of the [French] Republic, before coming to a mysterious end on the side of Mont-Blanc." With these words, Paul F. Jankowski introduces his subject, Russian-born Sacha Stavisky, who in 1934 set off a scandal that rivaled the Dreyfus affair in its intensity. "So wide was his reach [and] so dogged his pursuit of influence that," Jankowski finds, "his brief passage . . . reveal[s] . . . the inner workings of the Republic's high society." In the author's engaging tale of a flawed public order, the elite circles and the demi-monde of depression-era Paris come vividly to life.A confidence man with a long police record who had escaped trial because of the influence of his powerful friends, Stavisky saw his final get-rich scheme collapse in 1933. His unexplained death in an Alpine hide-out gave new credence to rumors that he had been abetted and protected by leading politicians. The scandal grew even uglier when the mutilated corpse of a judge connected to the case was found on a railroad track.Jankowski skillfully recounts Stavisky's notorious schemes and untimely demise, the deadly riot that rocked Paris in its wake, the fall of successive governments including that of Edouard Daladier, and the spectacular trial of many of the swindler's accomplices. "Sacha Stavisky, much against his will," the author observes, "had ignited an explosion that briefly engulfed the entire system of government."Jankowski's thorough investigation of these dramatic events includes research in police and judicial archives that at his request were opened for the first time. From these rich sources he saw "slowly emerge, as though drawn in invisible ink, the people of scandal, the portraits of a moment." His account brings to life a motley cast of characters including the rogue himself, whose Jewish origins proved a boon to anti-Semites; his widow Arlette, the glamour girl of the capital; and a mixed-race citizen of Martinique who was editor of a scurrilous weekly paper.Stavisky was ultimately a man who instigated a crisis that laid bare the strains and tensions in France's democratic institutions. For Jankowski, this crisis was the last and the loudest of the scandals that rocked France from the 1880s to the 1930s, punctuating with spectacle and tumult the implantation of a liberal republic after a century of failed experiments.