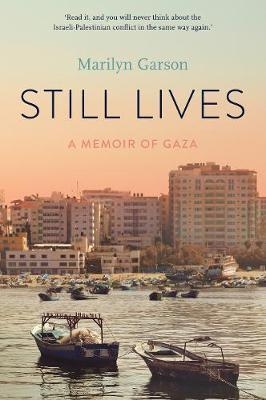 Four years, two wars and one most unlikely social enterprise.

Marilyn Garson was an experienced aid professional who created jobs at the edge of war. In 2011, she was invited to move to the Gaza Strip. Friends warned her that nothing worked behind the Gaza blockade. Unable to resist that challenge, Marilyn became the Economic Director of a large NGO programme, leading an ambitious young Palestinian team.

Gaza’s business owners, technology graduates, and job-seekers (facing the highest unemployment on earth) overturned Marilyn’s understanding of aid and justice. Then she volunteered to join the United Nations’ emergency team that would remain inside Gaza through the 2014 war.

Marilyn witnessed first-hand the impact of Israel’s urban assault and massive civilian displacement. The UN was prepared to shelter 35,000 displaced Gazans, but 293,000 arrived. Locked in beneath the bombs, they had nowhere safer to go, and nothing but the United Nations flag and international law to protect them.

Neither Marilyn’s team nor Gaza itself was the same after fifty days of bombardment. But the team was still determined to launch their social enterprise.

On her last day, one task remained: Marilyn must tell her Gazan colleagues that she is a Jew.

"Eloquent, animated and abounding with humanity. This is an absorbing book about many journeys: from Canada and New
Zealand to living in Gaza during its darkest hours; from an innocent abroad to becoming a proficient humanitarian professional; and from daughter and sister to finding her own moral voice in lands of tragedy. Marilyn Garson dissolves the stereotypes about Gaza, as human beings march through its pages. Read it, and you will never think about the Israeli–Palestinian conflict in the same way again."
– S. Michael Lynk, UN Special Rapporteur for the Situation of Human Rights in the Palestinian Territory Occupied since 1967

"Intimate, knowing, humane; effortlessly moving from the personal to the political and back; embracing as it interweaves the
neoliberal world order and the impoverished Gaza microcosm; written with a novelist’s eye for detail, in a prose that is as lush
and evocative as it is gripping—in short, to read Marilyn Garson’s portrait of Gaza is a transformative experience."
– Norman G. Finkelstein, author of Gaza: An Inquest Into Its Martyrdom

"Under Hamas rule and Israeli blockade, few Westerners have the opportunity to see Gaza for themselves. In this extraordinary new book, Marilyn Garson takes the reader behind the blockade walls, to the very heart of the Gaza Strip and its extraordinary inhabitants. No one reading her account can be indifferent to the fate of the people of Gaza. A gripping story, ‘Still Lives’ deserves the widest readership, as a book that can make a difference."
– Eugene Rogan, author of The Arabs: A History, Professor of Modern Middle Eastern History, Oxford University