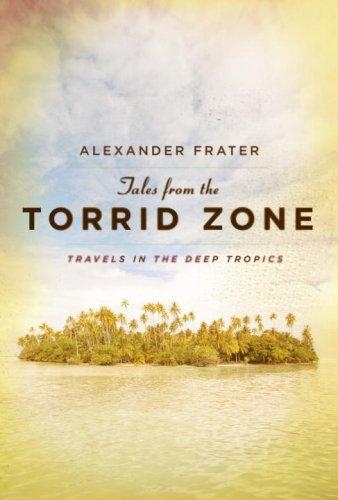 Tales from the Torrid Zone

From one of the most celebrated travel writers at work today—a vibrantly observant, witty, utterly captivating account of a lifetime’s worth of travel between the Tropics of Cancer and Capricorn.

Part memoir, part travelogue, all passionate appreciation, Tales from the Torrid Zone begins in Iririki, Alexander Frater’s birthplace. On this tiny island in the South Seas republic of Vanuatu, his grandfather, a Presbyterian missionary from Scotland, converted the inhabitants, his father ran the hospital and his mother built its first schoolhouse in their front garden. And it was on Iririki where, on the eve of his sixth birthday, Frater fell victim to “le coup de bamboo . . . a mild form of tropical madness for which, luckily, there is no cure,” and which has compelled him, again and again, to return to the “seeding, breeding, buzzing, barking, fluttering, squawking, germinating, growing” deep tropics.

His travels take him to nearly all of the eighty-eight countries encompassed by this remarkable, steamy swath of the world. He delves deeply into the history and politics of each nation he visits, and into the lives of the inhabitants, and of the flora and fauna. He is, at once, tourist, explorer and adventurer, as fascinated with—and fascinating about—the quotidian as he is with the extraordinary. But certainly, he does not lack for the extraordinary: dining with the Queen of Tonga in a leper colony; making his way across tropical Africa—and two civil wars—in a forty-four-year-old flying boat; delivering a new church bell to a remote Oceanian island.

From Fiji to Laos, Mexico to Peru, Senegal to Uganda, Taiwan to Indonesia, Frater gives us a richly described, wonderfully anecdotal, endlessly surprising picture of this diverse, feverish, languorously beautiful world—as much a state of mind as it is a geographical phenomen