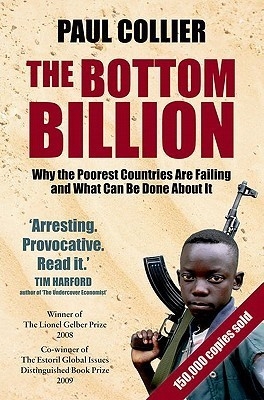 Global poverty, Paul Collier points out, is actually falling quite rapidly for about eighty percent of the world. The real crisis lies in a group of about 50 failing states, the bottom billion, whose problems defy traditional approaches to alleviating poverty.
In The Bottom Billion, Collier contends that these fifty failed states pose the central challenge of the developing world in the twenty-first century. The book shines a much needed light on this group of small nations, largely unnoticed by the industrialized West, that are dropping further and
further behind the majority of the world's people, often falling into an absolute decline in living standards. A struggle rages within each of these nation between reformers and corrupt leaders--and the corrupt are winning. Collier analyzes the causes of failure, pointing to a set of traps that
snare these countries, including civil war, a dependence on the extraction and export of natural resources, and bad governance. Standard solutions do not work against these traps, he writes; aid is often ineffective, and globalization can actually make matters worse, driving development to more
stable nations. What the bottom billion need, Collier argues, is a bold new plan supported by the Group of Eight industrialized nations. If failed states are ever to be helped, the G8 will have to adopt preferential trade policies, new laws against corruption, and new international charters, and
even conduct carefully calibrated military interventions.
As former director of research for the World Bank and current Director of the Center for the Study of African Economies at Oxford University, Paul Collier has spent a lifetime working to end global poverty. In The Bottom Billion, he offers real hope for solving one of the great humanitarian crises
facing the world today.