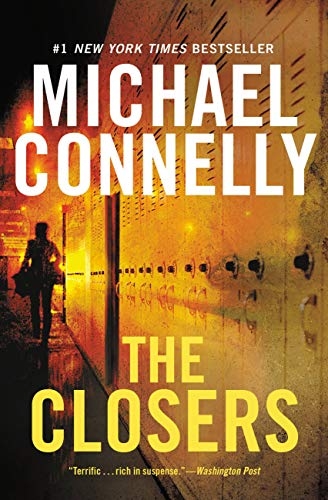 "A city that forgets its murder victims is a city lost. This is where we don't forget," Detective Hieronymus "Harry" Bosch is told by his new boss, as he ends a three-year retirement and rejoins the Los Angeles Police Department at the start of The Closers, the 11th installment of Michael Connelly's Edgar-winning series. Having long ago demonstrated his knack for cracking previously unsolved homicides, Bosch is assigned to the newly re-branded Open-Unsolved Unit (aka "cold case" squad), and charged with resolving the 17-year-old abduction and slaying of a mixed-race teenager.

Rebecca Verloren, 16, was discovered missing from her Chatsworth home on a July morning in 1988. Her corpse and the gun that ended her life were later found on a hill behind the house. An autopsy revealed that she'd recently undergone an abortion, and a piece of skin tissue--presumably the killer's--was found trapped inside the murder weapon. Only now, though, has DNA science matched that tissue to Roland Mackey, a dyslexic 35-year-old tow-truck operator with no obvious connection to the deceased. It's up to Bosch, once more partnered with Kizmin Rider, to determine whether Mackey offed Becky Verloren, or was at least an accessory to that tragedy. But the more Bosch and Rider dig into this dusty crime, trying in part to determine whether racial animosity might have been involved, the more pain and resistance they encounter. Becky's white mother maintains the teen's old bedroom as a shrine, while her shattered father, an African-American chef, has vanished into LA's homeless community. Of the two original investigators on the case, one has since committed suicide, and Bosch suspects that the other--now a police commander--is helping to keep the lid tight on some old departmental secrets, perhaps linked to our hero's nemesis, Deputy Chief Irvin S. Irving.

Understandably rusty after three years sans shield, Bosch makes his share of personal and professional mistakes here--including one that supplies The Closers with a lethal, plot-turning climax. But the greater problem is that Connelly exhausts so much time and effort following his protagonist through the tedium of modern police procedures, that he neglects what readers have liked more about this series in the past: its persistently deft exploration of Bosch's lonely, haunted soul (which remains mostly out of sight in this tale), and the author's frequent flights of lyrical prose (also not much in evidence). Would-be novelists wanting an example of a solidly constructed cop tale need look no further than The Closers. But readers hoping to learn why Connelly is so well-respected in this genre should turn, instead, to previous Bosch titles such as The Concrete Blonde, Angel's Flight, or City of Bones. --J. Kingston Pierce