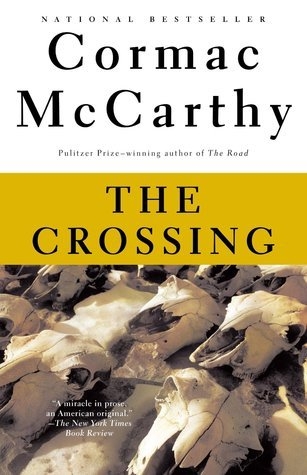 Following All the Pretty Horses in Cormac McCarthy's Border Trilogy is a novel whose force of language is matched only by its breadth of experience and depth of thought. In the bootheel of New Mexico hard on the frontier, Billy and Boyd Parham are just boys in the years before the Second World War, but on the cusp of unimaginable events. First comes a trespassing Indian and the dream of wolves running wild amongst the cattle lately brought onto the plain by settlers - this when all the wisdom of trappers has disappeared along with the trappers themselves. So Billy sets forth at the age of sixteen on an unwitting journey into the souls of boys, animals and men.

Having trapped a she-wolf he would restore to the mountains of Mexico, he is long gone and returns to find everything he left behind transformed utterly in his absence. Except his kid brother, Boyd, with whom he strikes out yet again to reclaim what is theirs - thus crossing into "that antique gaze from whence there could be no way back forever."

What they find instead, is an extraordinary panoply of fiestas and circuses, dogs, horses and hawks, pilgrims and revolutionaries, grand haciendas and forlorn cantinas, bandits, gypsies and roving tribes, a young girl alone on the road, a mystery in the mountain wilds, and a myth in the making.

And in this wider world they fight a war as rageful as the one neither, in the end, will join up for back home. One brother finds his destiny, while the other arrives only at his fate.

An essential novel by any measure, and the transfixing middle passage of Cormac McCarthy's ongoing trilogy, The Crossing is luminous and appalling, a book that touches, stops,and starts the heart and mind at once.