Home Non Fiction The Decline and Fall of the Roman Empire 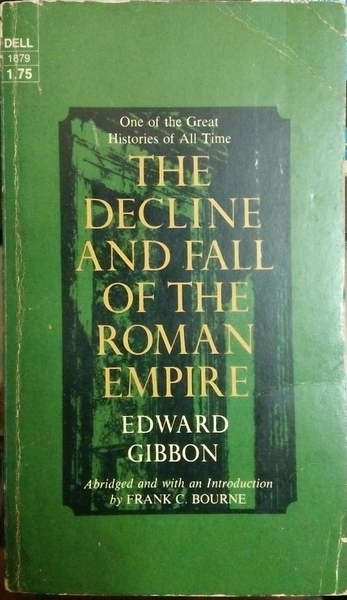 The Decline and Fall of the Roman Empire

The History of the Decline & Fall of the Roman Empire was written by English historian Edward Gibbon & originally published in six quarto volumes. Volume 1 was published in 1776, going thru six printings; 2-3 in 1781; 4-6 in 1788-89. It was a major literary achievement of the 18th century, adopted as a model for the methodologies of historians.

The books cover the Roman Empire after Marcus Aurelius, from 180 to 1590. They take as their material the behavior & decisions that led to the eventual fall of the Empire in East & West, offering explanations.

Gibbon is called the 1st modern historian of ancient Rome. By virtue of its mostly objective approach & accurate use of reference material, his work was adopted as a model for the methodologies of 19-20th century historians. His pessimism & detached irony was common to the historical genre of his era.

Although he published other books, Gibbon devoted much of his life (1772-89) to this one work. His Memoirs of My Life & Writings is devoted largely to his reflections on how the book virtually became his life. He compared the publication of each succeeding volume to a newborn.

Gibbon offers an explanation for why the Roman Empire fell, a task difficult because of few comprehensive written sources, tho he wasn't the only historian to tackle the subject. Most of his ideas are taken from what few relevant records were available: those of Roman moralists of the 4-5th centuries.

According to Gibbon, the Empire succumbed to barbarian invasions because of lost of civic virtue. They'd become weak, outsourcing defence to barbarian mercenaries, who became so numerous & ingrained that they took over. Romans had become effeminate, incapable of tough military lifestyles. In addition, Christianity created belief that a better life existed after death, fostering indifference to the present, sapping patriotism. Its comparative pacifism tended to hamper martial spirit. Lastly, like other Enlightenment thinkers, he held in contempt the Middle Ages as a priest-ridden, superstitious, dark age. It wasn't until his age of reason that history could progress.