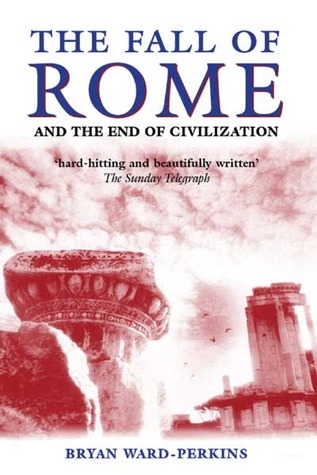 The Fall of Rome and The end of Civilization

Was the fall of Rome a great catastrophe that cast the West into darkness for centuries to come? Or, as scholars argue today, was there no crisis at all, but simply a peaceful blending of barbarians into Roman culture, an essentially positive transformation?

In The Fall of Rome, eminent historian Bryan Ward-Perkins argues that the "peaceful" theory of Rome's "transformation" is badly in error. Indeed, he sees the fall of Rome as a time of horror and dislocation that destroyed a great civilization, throwing the inhabitants of the West back to a standard of living typical of prehistoric times. Attacking contemporary theories with relish and making use of modern archaeological evidence, he looks at both the wider explanations for the disintegration of the Roman world and also the consequences for the lives of everyday Romans, who were caught in a world of marauding barbarians, and economic collapse.

The book recaptures the drama and violence of the last days of the Roman world, and reminds us of the very real terrors of barbarian occupation. Equally important, Ward-Perkins contends that a key problem with the new way of looking at the end of the ancient world is that all difficulty and awkwardness is smoothed out into a steady and positive transformation of society. Nothing ever goes badly wrong in this vision of the past. The evidence shows otherwise.

Up-to-date and brilliantly written, combining a lively narrative with the latest research and thirty illustrations, this superb volume reclaims the drama, the violence, and the tragedy of the fall of Rome.

From Back Cover:
For decades, the dominant view amongst historians has been that the 'fall of Rome' was a largely peaceful transition to Germanic rule, within a period of positive cultural evolution. Now, Bryan Ward-Perkins argues for what you always thought but didn't dare say: the Roman Empire really did fall to violent invasion; the 'transformation' of the Roman world saw a catastrophic collapse of living standards; and the 'Dark Ages' were genuinely sombre.