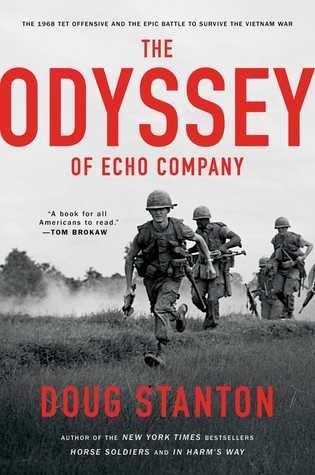 The odyssey of echo company

A powerful work of literary military history from the New York Times bestselling author of In Harm’s Way and Horse Soldiers, the harrowing, redemptive, and utterly unforgettable account of an American army reconnaissance platoon’s fight for survival during the Vietnam War—whose searing experiences reverberate today among the millions of American families touched by this war.

On a single night, January 31, 1968, as many as 100,000 soldiers in the North Vietnamese Army attacked thirty-six cities throughout South Vietnam, hoping to topple the government and dislodge American forces. Forty young American soldiers of an army reconnaissance platoon (Echo Company, 1/501) of the 101st Airborne Division and hailing from small farms, beach towns, and such big cities as Chicago and Los Angeles are suddenly thrust into savage combat, having been in-country only a few weeks. Their battles against both North Vietnamese Army soldiers and toughened Viet Cong guerillas are relentless, often hand-to-hand, and waged night and day across landing zones, rice paddies, hamlets, and dense jungle. The exhausting day-to-day existence, which involves ambushes on both sides, grueling gun battles, and heroic rescues of wounded comrades, forges the group into a lifelong brotherhood. The Odyssey of Echo Company is about the young men who survived this epic span, and centers on the searing experiences of one of them, Stanley Parker, who is wounded three times during the fighting.

When the young men come home, some encounter a country that doesn’t understand what they have suffered and survived. Many of them fall silent, knowing that few of their countrymen want to hear the remarkable story they have lived to tell—until now. Based on hundreds of hours of interviews, dozens of personal letters written in the combat zone, Pentagon after-action reports, and travel to the battle sites with some of the soldiers (who meet their Vietnamese counterpart), and augmented by detailed maps and remarkable combat zone photographs, The Odyssey of Echo Company breaks through the wall of time to recount ordinary young American men in an extraordinary time in America and confirms Doug Stanton’s prominence as an unparalleled storyteller of our age.