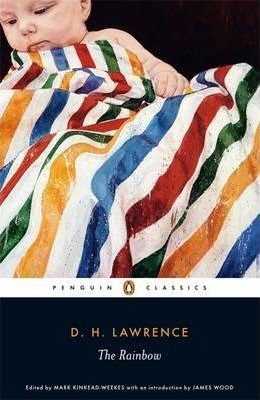 With its frank portrayal of human passion and sexual desire, D.H. Lawrence's The Rainbow was banned as 'obscene' in Britain shortly after first publication. This Penguin Classics edition is edited with an introduction by James Wood.

Set in the rural Midlands, The Rainbow chronicles the lives of three generations of the Brangwen family over a period of more than 60 years, setting them against the emergence of modern England. When Tom Brangwen marries a Polish widow, Lydia Lensky, and adopts her daughter Anna as his own, he is unprepared for the conflict and passion that erupts between them. All are seeking individual fulfilment, but it is Ursula, Anne's spirited daughter, who in her search for self-knowedge, becomes the focus of Lawrence's examination of relationships and the conflicts they bring, and the inextricable mingling of the physical and the spiritual. Suffused with Biblical imagery, The Rainbow addresses searching human issues in a setting of precise and vivid detail.

In his introduction James Wood discusses Lawrence's writing style and the tensions and themes of The Rainbow. This Penguin edition reproduces the Cambridge text, which provides a text as close as possible to Lawrence's original. It also includes suggested further reading, a fragment of 'The Sisters II' from his first draft, and chronologies of Lawrence's life and of The Rainbow's Brangwen family.

D.H. Lawrence (1885-1930), English novelist, storywriter, critic, poet and painter, one of the greatest figures in 20th-century English literature. Lawrence published Sons and Lovers in 1913, but The Rainbow, completed in 1915, was declared obscene and banned two months after first publication; and for three years he could not find a publisher for Women in Love, which he completed in 1917. His last novel, Lady Chatterley's Lover, was published in 1928, but banned in England and America.

If you enjoyed The Rainbow, you might like Lawrence's Women in Love, also available in Penguin Classics.

'A brave and important book, passionate and wildly ambitious'
Independent on Sunday