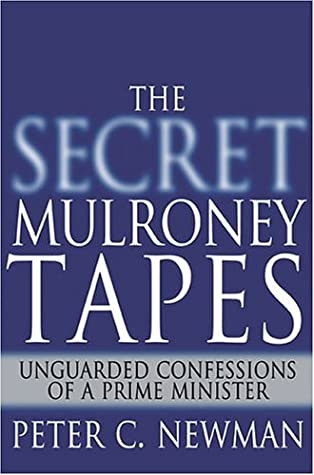 The Secret Mulroney Tapes is an outrageous and intimate portrait of a Canadian prime minister, as told in his own words. There has never been a political book like this, and there will almost certainly never be another.

Peter C. Newman, the author of books about John Diefenbaker, Lester B. Pearson and Pierre Elliott Trudeau, as well as 2004’s number-one bestselling memoir, Here Be Dragons: Telling Tales of People, Passion and Power, has done it again. He has written twenty-two books that have sold two million copies, and earned him the title of Canada’s “most cussed and discussed” political commentator. Here, his no-holds-barred profile of Canada’s most controversial – and most reviled – prime minister breaks new ground.

Compiled from years of candid, taped conversations with Mulroney and the people closest to him while he was in power, the sometimes uproarious and often disturbing interviews – 7,400 pages of transcripts totalling 1.8 million words – have been sealed until now. Stunningly indiscreet and savagely frank, Mulroney is the first prime minister to be so nakedly outspoken. Yet he is also revealed as a witty Irish charmer, ready with a quick line to raise a laugh, no matter how impudent or profane, a man as warm in private as he was defensive in the public eye.

Mulroney names the names and spills the beans about what really goes on in Ottawa, which he describes as a “sick” city that runs on “goddamned incest”: “They’re all married to one another. They’re shacked up with one another. Their wives are on the payroll of the CBC. It’s just awful.” Lucien Bouchard, his one-time soulmate, he calls “bitter and profane” and “extraordinarily vain.” He writes off his constitutional foe, former Newfoundland premier Clyde Wells, as an “unprincipled son of a bitch.” His disgust for the press is as monumental as his sense of being misunderstood, and in his eyes the Ottawa press corps are “a phony bunch of bastards” who don’t give him credit even when the world applauds him for being “one of the three men who played the most important role in the collapse of the Berlin Wall.”

Out of The Secret Mulroney Tapes emerges a startling picture of the politician whose reign shocked and appalled and yet also revolutionized this country. No other prime minister in Canadian history aroused a stronger emotional response than Brian Mulroney. This book provides Canadians with a unique insight into the bold politician who changed their country like no other.