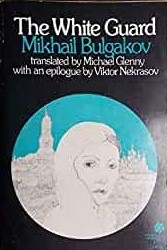 Bulgakov's elegant first novel about the unfolding of the October revolution in Kiev--referred to as The City in the novel--has been rereleased by independent publisher Melville House this year, in the Michael Glenny translation. Told through multiple points of view, the book centers upon two days in the Russian Civil war, December 13 and 14, 1918, when the city of Kiev, up to then controlled by the Ukrainian Hetman Skoropadsky, a German puppet and ally of the Monarchist Russians, falls to the armies of Petlyura, a Ukranian peasant nationalist, a figure of mystery and rumor. The enemy of the Whites, Petlyura's troops especially target the Russian officers who have supported the corrupt Skoropadsky and the Russian imperialist presence.

The heart of the novel is the family of the Turbins, Alexei, a doctor returning from WWI, his little brother Nikolai, 17 and a cadet at the Russian military academy, and their sister Elena, the muse of a circle of Alexei's officer friends, as well as the Turbin's comic foil, Vasily Lisovich, known as Vasilisa (after the folk heroine Vasilisa the Beautiful) an almost Doestoyevskian idiot who is the Turbin's downstairs neighbor.

Admirably told, the novel reveals the hand of Bulgakov the dramatist as well as that of the prose artist, and aspects such as the dreams and Alexei Turbin's delirium in a fever from typhus very much herald the arrival of the surrealistic Master and Margarita.

The White Guard beautifully portrays the chaos of a civil war, and meditates on themes of family loyalty and friendship.

The prose work was published in 1925 as a magazine serial, but the magazine folded before the serial was complete. Stalin was said to have seen the play many times, it probably saved Bulgakov's life. The Master and Margarita was far more politically questionable and never saw the light of day in Bulgakov's lifetime. The popular play based on this story ran in Soviet Russia from 1926 to 1941--but the book did not appear until 1966.