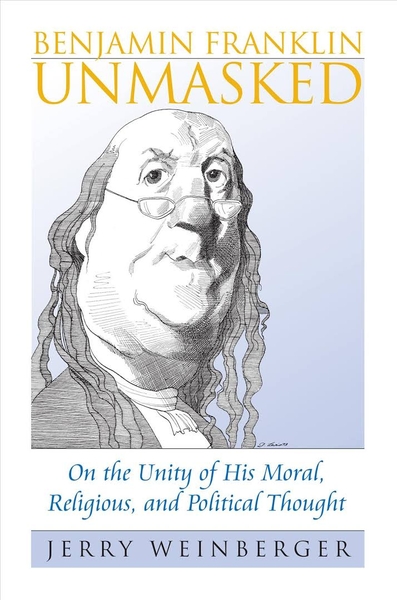 Moral paragon, public servant, founding father; scoundrel, opportunist, womanizing phony: There are many Benjamin Franklins. Now, as we celebrate the tercentenary of Franklin's birth, Jerry Weinberger reveals the Franklin behind the many masks and shows that the real Franklin was far more remarkable than anyone has yet discovered.

Taking the Autobiography as the key to Franklin's thought, Weinberger argues that previous assessments have not yet probed to the bottom of Ben's famous irony and elusiveness. While others take the self-portrait as an elder statesman's relaxed and playful retrospection, Weinberger unveils it as the window to Franklin's deepest reflections on God, virtue, justice, equality, natural rights, love, the good life, the modern technological project, and the place and limits of reason in politics and human experience. Along the way, Weinberger explores Franklin's ribald humor, usually ignored or toned down by historians and critics, and shows it to be charming-and philosophic.

Following Franklin's rhetorical twists and turns, Weinberger discovers a serious thinker who was profoundly critical of religion, moral virtue, and political ideals and whose grasp of human folly constrained his hopes for enlightenment and political reform. This close and amusing reading of Franklin portrays a scrupulous dialectical philosopher, humane and wise, but more provocative and disturbing than even the most hardboiled interpreters have taken Franklin to be--a freethinking critic of Enlightenment freethinking, who played his moral and theological cards very close to the vest.

Written for general readers who want to delve more deeply into the mind of a great man and great American, Benjamin Franklin Unmasked shows us a massively powerful intellect lurking behind the leather-apron countenance. This lively, witty, and revelatory book is indispensable for those who want to meet the real Franklin.